Spreading mulch is beneficial. It buffers soil temperatures, reduces erosion and water loss from evaporation, and provides food for the decomposers making the nutrients in the organic material available to your plants. But spreading mulch is not the easiest or best thing to do. You are better off growing living mulch.

Let me explain why 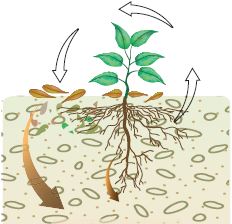 This picture illustrates the ‘old-fashioned’ view of organic matter recycling in soil.

We used to think that leaving the above-ground inputs from leaves, stubble and branches, plus spreading compost and mulch, was the best way to increase organic matter and carbon levels in our soil.

But it’s not true

Most of the carbon is released back into the atmosphere with each out-breath of the soil organisms feeding on the plant remains. That’s why mulch has the annoying habit of disappearing so quickly!

Even tougher plant materials like lignin, don’t necessarily hang around for long. Mulch has a limited effect on carbon levels, and applying mulch doesn’t usually lead to long term storage of carbon in our soils.1

We need the long-term storage facilities stable compounds of humus provide to build organic matter and carbon levels in our soil. Humus can remain for thousands of years in soil.

Creating humus is a construction process

Contrary to what was previously thought, humus is not a product of decomposition. Humus isn’t made through the decomposition of organic matter.

Humus is built where oxygen levels are lower inside soil aggregates and the rhizosphere around plant roots by mycorrhizal fungi, free-living nitrogen-fixing bacteria and phosphorus-solubilising bacteria.2

Microbes need root exudates to do this. The ‘energy drinks’ plants deliberately secrete from their roots, using 5% to 21% of the carbon they capture through photosynthesis.3

When scientists first discovered root exudates, they thought the plants had something wrong with them and called the phenomenon ‘Leaky Root Syndrome’.

But plants know what they are doing!

Plants produce these exudates because:

And they get many other benefits (see here for details).

One thing’s for sure – mulch doesn’t have any roots! By growing living mulch and other living ground covers we produce more root exudates.

So next time you’re working hard spreading dead plant material, think instead about growing living mulch to provide energy drinks and carbon sandwiches for the mycorrhizal fungi and bacteria manufacturing humus in your soil…